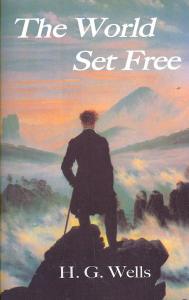 “The World Set Free” is one of those books that, sadly, may have changed the course of history with its technological predictions. Physicist Leó Szilárd read the book the very same year that the neutron was discovered.

Luckily, we’ve yet to create bombs quite like the ones he describes, which, when set off, cause a literal “blazing continual explosion.”

What Happened to the Corbetts? by Nevil Shute (1937)

One of the most popular authors of his time, Shute set out to write a book that would educate about the danger of air raids by an enemy state. His story successfully foretold of a European superpower who bombs Southampton to devastating effect. The novel addresses the issues of the aftermath of bombing, such as the spread of disease from lack of clean water, and what may be done to relieve the distress of those affected by it. On the initial day of publication, several thousand copies of the novel were distributed free of charge to ARP members to inform them of what they might expect if war ever broke out in the skies… Just a few years later, the world was at war with Germany.

“Twenty Thousand Leagues Under the Sea” by Jules Verne

Jules Verne is known as one of the most talented authors of the 19th century, predicting everything from lunar modules to solar sails many, many years before they were invented.
His most famous book, however, is “Twenty Thousand Leagues Under the Sea.” Published in 1870, the novel predicted electric submarines years before they were officially invented.

Almost 70 years before credit cards were invented, Bellamy had a similar idea in his 1888 Utopian science fiction novel.

After Julian West falls asleep for 113 years and wakes up in the year 2000, he finds that everyone uses “credit” cards to buy goods. Though the way Bellamy’s cards work is closer to a debit card or Social Security dividend, it remains nonetheless an interesting prediction.

“Stranger in a Strange Land” by Robert Heinlein

This 1961 novel follows Valentine Michael Smith after he finally comes home to Earth after being raised by Martians since he was a child.

In addition to discussing futuristic topics such as intergalactic politics, “Stranger in a Strange Land” also predicted waterbeds a decade before they came to fruition.