Increasing technology not only provides us with ways of doing things that we were previously unable to do, but also gives us the ability to turn natural, unavoidable disasters into a source of clean energy. Taking into considering the typhoons which plague his country Japanese engineer, Atsushi Shimizu, and his team have designed a wind turbine that is capable of harvesting energy from the power that they generate. 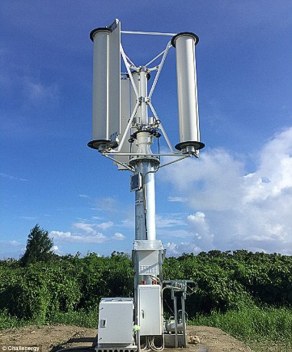 These large storms are created in regions of low atmospheric pressure, with winds which can exceed 85 mph. Japan has been using European designed wind turbines which have been proven to be incapable of withstanding the force behind the typhoons, and many of them are destroyed by the winds. Shimizu’s eggbeater shaped turbine has been specifically designed to withstand these conditions with two vital changes to the traditional design.

The first thing needed was to ensure that the machine would be able to handle Japan’s unpredictable wind patterns, which the team was able to do by installing an omnidirectional vertical axis. The Magnus effect, which is the sideways force that causes a spinning object to deviate from a straight path, was also added to the design. This combination significantly increases the level of control extended over the turbines blades, and the centre rod can be tightened to adjust their speed ensuring that they won’t be able to spin out of control during a storm.

Shimizu has estimated that the kinetic energy produced by a single typhoon would be able to power his country for about 50 years, if they were able to harvest it. Turning a natural disaster into a source of energy is an amazing opportunity, and would be the solution to the energy problem that Japan now faces. The country’s plan had been for 60% of their energy supply to be from nuclear power by 2100. However, a tsunami which hit them in 2011 caused three nuclear meltdowns, and resulted in the reconsideration of this energy source.

Japan is currently importing about 80% of its energy, and there is also a significant increase in its usage of solar power. Shimizu is convinced that the large amount of wind power available in the country would be significantly more beneficial once harvested. His team has installed their first prototype in Okinawa and are currently waiting for a typhoon to test its power. With at least six typhoons hitting the country in the past year it is safe to say that the wait won’t be long, and the engineer is likely to see his dream of changing the country’s future with a single turbine coming true sooner rather than later.