Like all the other known planets that neighbor earth in our spiral galaxy, our planet also has a magnetic field around it of its own. This field has two known poles – the north magnetic pole and the south magnetic pole. The north magnetic pole has recently caught the attention and interest of scientists because of an interesting shift they observed in its movement over the past few years.

The North Pole Movement in Past 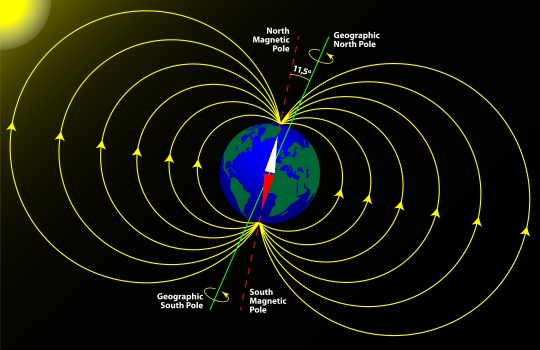 Generally, the north magnetic pole has been observed to constantly wander around the northern hemisphere. First discovered in 1831, scientists kept on observing the same trend in the North Pole’s movement for years until a deviation was noticed a few years ago.

The northern pole’s magnetic movements slowly changed position over time due to the changes that occurred in the magnetic core of the Earth. It was found that the North Pole was moving in loops that made it travel around 50 miles in 24 hours. The actual location of these loops, however, varies at a pace of around 25 miles in 365 days. Constant observation during the last one and a half century has seen the north magnetic pole travel a total distance of around 685 miles or 1102Kms. The movement of the south magnetic pole, has also been observed and it is no different than that of its northern counterpart.

The north magnetic pole was previously moving nearer to Russian with a speed of around 35 miles per year. The expected movement pattern for the north magnetic pole was for it to move in a steady speed around Canada. However, now this pole is frantically moving from Canadian Arctic towards Siberia since it has drifted away from its previous place of stay – the Canadian Arctic. Over the past 20 years, scientists have observed the pole moving towards Siberia, even crossing the prime meridian, something that was not expected. The prime meridian is an imaginary divide that is accepted as the standard time zone of the world. The crossing of the meridian by the north magnetic pole has happened for the first time after its discovery and this has led scientists to try and predict the future.

What will happen next?