The terminator movies are no longer fictitious work, because the storyline is being followed through in reality. That vision of killer robots taking over the planet due to the artificial intelligence they possess may not completely be coming true. However, machines that have decision-making capabilities with lethal consequences are already being tested in parts of the world. Autonomous killer robots are a real thing and here is why we should all be worried.

Advanced AI In The Hands Of The Superpowers 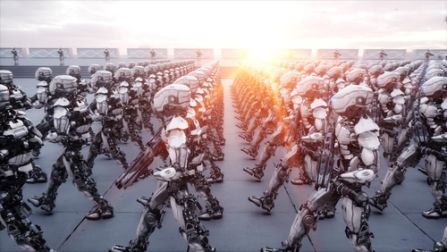 Just four years ago, Stephen Hawking warned everyone that, ‘the development of full artificial intelligence could spell the end of the human race…. It would take off on its own, and re-design itself at an ever-increasing rate. Humans, who are limited by slow biological evolution, couldn’t compete and would be superseded.’ And with the superpowers all investing in autonomous weaponry, it is frightening to think of the consequences that could prevail in the near future. The US Department of Defense already displayed 103 autonomous drones flying over the state of California. Even though they were not armed, they flew without any human input, reaching their destination automatically with the algorithms set. Weaponry with differing degrees of self-sufficiency actually being upgraded and used by those who have a high-tech military, including China, the US, Russia, the UK, Germany, South Korea and Israel. Countries such as China are completely silent regarding their position on LAWs (lethal autonomous weapons), and others are vague, which is quite a frightening thing to think about.

The saying that, ‘Guns don’t kill people, people kill people,’ is effectively becoming less and less true. The dangers that autonomous killer robots pose are terrifying, consider they can quite easily come true. The terminator situation that even Hawking has warned us about where AI becomes self-sufficient and kills everyone is a possibility people dismiss as fiction. Another event that could happen is if the wrong people got hold of these technologies, or if they were hacked, they could be used to obliterate entire areas. World War III has also become quite the possibility, with autonomous killer robots aiding nuclear weaponry to eliminate countries. It could also be used to target innocent people who may be speaking against an agenda. It is completely unfair to use autonomous weapons for security as innocent people could lose their lives, and could not have the chance for a fair trial, or rehabilitation.

International campaigns such as Campaign to Stop Killer Robots has been urging countries to talk about banning autonomous weapons since 2013. Just by banning two functions involved in autonomous weapons such as automatically selecting targets and using violent techniques can really save the world from the potential horrors of autonomous killer robots, without hampering researchers’ advancement in AI technologies.

It is important to make people aware that killer robots are a very real problem, which has already become possible. Our lives will completely change in unimaginable ways once autonomous killer robots are used by governments for wars and security purposes.