As we move forward in life, it begins to seem that the days are getting longer and longer. Many of us might attribute that to exhaustion or lack of sleep, however, there is some scientific evidence behind the fact that the days truly are getting longer. Research shows that as the moon moves further away, the days on Earth seem to extend.

The moon, that we see every night is around 4.5 billion years old and is 200,000 plus miles away from Earth. However, it is said that because of the tidal forces that take place between the moon and Earth, the moon moves around 1.5 inches away from the Earth every year. This causes the Earth to rotate more slowly than it did the year before.

Scientists use a statistical method that is called astrochronology. Through this, astronomers looked back into the Earth’s past and tried to recreate the history of the planet. The results from the software revealed that only 1.5 billion years ago the moon was substantially closer to Earth than it is now. This, as a result, made Earth spin faster and a day on the Earth lasted around 18 hours.

So, through this observation it seems that as the moon moves farther away from Earth – Earth, in turn, spins slower. Hence, leading to a comparatively longer day. The moon and other solar bodies can greatly influence the spin of earth. Milankovitch cycles can help determine exactly where the sun’s light falls and then determine the days.

It is said that 6 million years ago during the cretaceous period, the day was 23 and a half hours long, now it is 24 hours long, which seems to be a huge difference in just this many years. 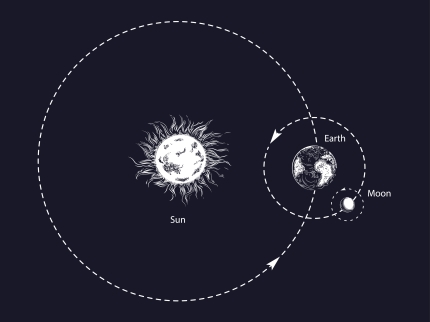 However, an interesting thing to note and keep in mind is that through geological research, it was found that in this same period the year would be a full week longer. This is because, through the measurements done in a geological study, they found that the year used to be longer than it is in the current time.

This change can also be attributed to the moon. This is because Earth’s orbit around the sun does not change. However, the tidal forces we discussed about have led to this change too. So as the days tend to get longer because of the moon, the years also get shorter due to it.

This discovery shows us how amazing and dynamic Earth and the solar system are. It shows us the secrets that the solar system holds and how humans are unaware of most of which has already happened in the planet’s past. As technology will further develop and new innovations will begin to take place, we will start to uncover more about Earth’s past and exactly how it impacts our future.